What is Ghost Fishing ?

Sadly lost or abandoned fishing gear is problematic in our oceans, with an estimated 640,000 tonnes lost into the sea globally each year. The lost nets and pots known as ‘Ghost Gear’ continue fishing non-stop. The catch is never landed and the trapped animals act as bait for others, in a non-stop cycle of wasteful deaths known as Ghost Fishing. The “Ghost Gear” recovered can be reengineered into ingenious new products by brands supported by EcoSki, and hence we are delighted to have chosen Ghost Fishing as one of our preferred Charites in partnership with 1% for the Planet.

In August 2020, Ghost Fishing UK found a “monster” net in Hand Deeps, a popular fishing and diving reef just off the coast of Plymouth. An enormous lost fishing net 200 metres long that required a team of ten volunteer scuba divers to recover the net before painstakingly unpicking 115 trapped animals from the net and returning them to the sea.

Most animals were still alive and included spider crabs, lobsters, edible crabs and a large pollack. Despite the scorching weather and requirement for face coverings and diligent hygiene on board, the Ghost Fishing volunteers spent two hours following two dives freeing the animals. “We are so pleased to be able to get back out doing such important work, even in times like these” Christine Grosart told us. Christine is a trustee of the charity, an instructor for the Ghost Fishing UK course, photographer and has recently been appointed as a Fellow of the Royal Geographical Society alongside her colleague, and Chairman, Richard Walker! 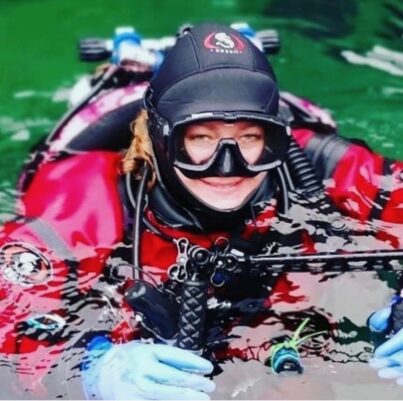 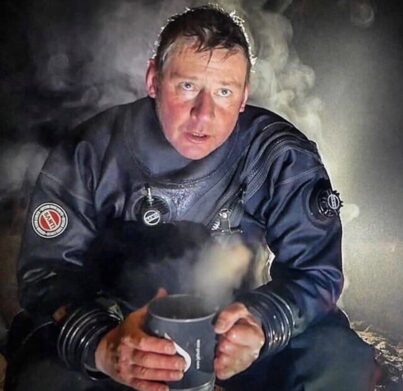 “This net is huge but on reefs, it is sometimes very difficult to pinpoint exactly where the ghost gear is. Fortunately, we had excellent information from several reports and with good coordinates we were able to find it within 8 minutes. It is extremely rewarding not just to recover such a huge net, but to release 115 animals back into the sea, the majority of which were still alive and kicking.” 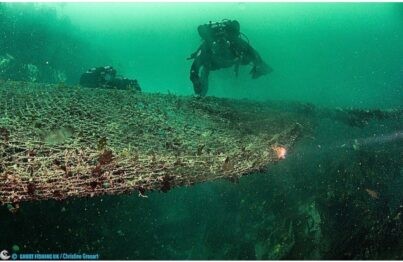 James Balouza from In Deep Dive Centre donates his time and equipment, “Being able to support Ghost Fishing UK with logistics for their diving operation as well as to assist with the removal of the net from Hand Deeps was incredibly rewarding and also of prior importance to maintain the health of the reef. Hand Deeps is one of the most biodiverse reefs that we regularly dive and as such is a very popular spot for our customers. Ghost nets, such as the one recovered this week pose a threat to a vast array of marine life. Their swift and effective removal significantly decreases the impact to the marine environment and industries that depend on the health of our coast.” Ghost fishing UK encourages divers and fisheries alike to tell them when and where nets and pots have been lost. It is dependent on volunteers to give up their time for the charity to continue this important work and aims to work closely with the fishing industry. 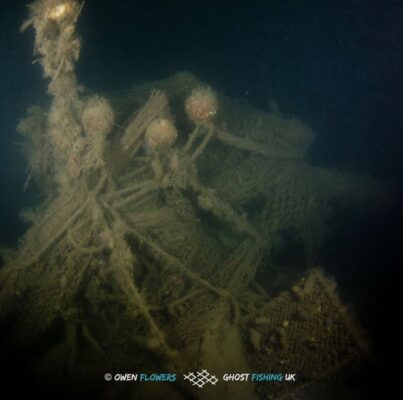 Thank you, Ghost Fishing, for the brave and unique but vital work you carry out as volunteers, striving to keep our oceans clear and safe for marine life. We are so pleased we can support you and brands who make brilliant use of the Ghost Gear into functional ski wear and accessories amongst many other innovative products.