I have been lucky enough to work with some of the worlds’ best photographers, but many years ago I was invited to a talk by one I hadn’t heard of. Little did I know that he would turn out to be a huge influence on my life, the way I live it, and the way I look at the world.

I remember that talk so clearly, and the profound affect it had on me. That photographer was Martin Hartley. Now someone I am proud to call a true friend. So of course, he was my first call when we needed some photos taken for EcoSki. 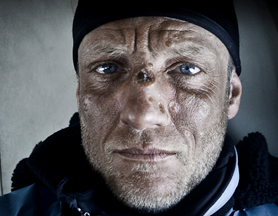 Not only is Martin one of the best photographers I have ever worked with, he is also a passionate environmentalist. Having spent more than 400 demanding days working in the Arctic and Antarctic on more than 20 polar expeditions and assignments, several of these endeavours have focused on collecting data to help scientists better understand our planet. Time magazine has acknowledged Martin’s contribution to science with its prestigious Hero of the Environment award for his research work on multiple surveys of the frozen Arctic Ocean. In 2017, he joined a North Pole expedition to collect snow depth measurements for the European Space Agency’s CryoSat programme, which is being conducted in concert with NASA‘s Operation IceBridge mission.

Martin’s passion for using his hard-won expedition and photographic expertise to benefit the future of our planet has taken him beyond the Polar Regions to desert, jungle, mountain and oceanic environments. He has documented indigenous communities, corporate social responsibility initiatives and ground breaking scientific programmes.

Given EcoSki’s drive to make the skiwear industry more responsible and sustainable, combined with Martin’s passion for the environment we wanted to find out what drives him and pick his brains about how we can, and must, do better. So is there a particular moment, a tipping point as such, for him, which had a real impact:

“I took a picture in 2017 when skiing to the North Pole on an expedition for NASA (part of the Ice Bridge program). Usually at that point in that area the ice formations are as big as houses, massive blocks of ice some as big as Cathedrals everywhere you look, but it was as flat as a tennis court, just the odd lump of ice, not much taller than knee high here and there for 200 miles. I looked at that picture and realised it looked nothing like the Arctic Ocean, I couldn’t help but wonder where all the ice had gone”. All the ice we had been skiing on was ice that had formed the previous winter and would not be able to survive a single summer.

When Martin got home, that picture had lit a fire in him, so, wanting to know what had happened to all the old ice, he set about researching what was going on. He soon realised that the old ice ‘ice Cathedrals’ that did still exist were hidden away in a very small part of the Arctic Ocean, just pushed up against Canada and Greenland, but worryingly a lot of the ‘big ice’ has gone from the Arctic Ocean.  This sounds like a pretty scary proposition so what does Martin think this means for the planet?

“Quite simply it means that the little white cap that’s floating at the top of the earth which is our air conditioning system for the entire northern hemisphere is melting. Once it’s gone it will fundamentally affect our entire weather system, having implications on our climate. The first impact will be the unpredictability of weather patterns, which will result in irregular food crops in the mid latitudes, and this will affect everyone’s pockets and then we will all feel the full force of our impact on our climate.”

So what does Martin think if anything, he can do about it, or to encourage people to change their behaviour?

“Seeing a place I’d been going to for 16 years disappearing in front of my eyes really made me want to try and use my knowledge and experience to educate people who don’t know anything about the arctic or the impact we have on it here today.

I’ve grown up being aware of the impacts that I have personally on the planet, whether it’s turning a tap on to brush my teeth, or turning a light on and leaving it on when you leave the room. I want to help more people be aware of those little things and how significant they are. They certainly became more significant for me right then when I looked at that picture. It started me thinking I need to do more personally, how can I reduce my own impact, today, right now, not in a year’s time, or 10 years, and I want to encourage others to do the same”.

With all this in mind, we’re keen to know whether Martin had any advice for us all about how we can start to reduce our impact on the planet?

One final thought, with EcoSki being born out of a desire to protect the planet for the next and future generations, what is the one thing we can do to encourage our little explorers and adventurers?

“One thing we mustn’t do is stop going outside. By going outside we see the world that we need to protect, by walking into the woods and listening to birdsong, and watching our seasons change is the very thing that keeps all our spirits alive. One thing that Covid 19 has taught us is that everything is connected to everything. What we do here in our day to day lives affects everything, including the ice in our Polar regions. Our new generation of mini Explorers will be the caretakers of our Earth – by encouraging exploration we are sewing the seeds of conservation for the ones that follow”. 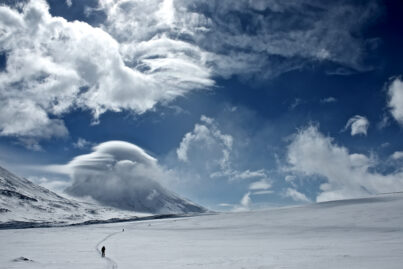