While most of us view skiing as a welcome holiday – a week of fresh mountain air, sociable slaloms, long lunches, all topped off by evenings of apres ski – the activity is a very different experience for the elite British Army ski teams: training is extreme, lasts a full season and requires supreme fitness.

Army skiing forms part of Adventurous Training, which provides ‘challenging outdoor training for Service personnel in specified adventurous activities with controlled exposure to risk’. This develops leadership, teamwork, physical fitness, moral and physical courage; as well as other personal attributes and skills that are vital to the delivery of operational capability.

The British Army has an association with skiing dating back to 1947, when Field Marshal Montgomery formed The Army Ski Association to develop military and technical skills on snow and ice, and provide a break from routine training and operations in the immediate post-war years.

Captain Lloyd Diprose of 6 Regiment, Royal Logistic Corps spoke to EcoSki about what it’s like to be part of the highest performing British Army Ski team and the benefits he sees that skiing gives all soldiers who take part in the sport.

“The perception in some quarters is that we’re off on a jolly, but actually it’s a full-on few months. We’re up early for a run every morning, we are the first ones on the lift and usually the last off it, regardless of terrible weather conditions,  because we are there to train and to be the best we can possibly be. However, I’m not going to suggest there are more hardships than perks and we do have a fantastic time. When we return though, we are keen to prove that we are grafters – the whole team makes sure we put the effort in to work extra shifts and pull our weight.”

Breaking down barriers to entry and opening up a sport that is seen by some as being elitist is a key benefit for soldiers. “Many army recruits have never had the opportunity to try skiing before they join us,” says Capt. Diprose, “Up to forty percent of soldiers come from broken backgrounds, so when they agree to sign up they are looking for a sense of belonging. The ski team offers many the chance to try something different and as a sport it has massive retention within the army, because everybody finds it so positive. From an army perspective there is also the added benefit that because of the intensive team building that takes place during training, they get a much better soldier out of it too.” 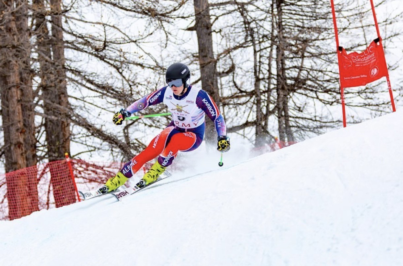 Fresh air, exercise, setting personal and team physical and mental challenges – skiing clearly provides much synergy with the army core values. The teams live closely as a tight six-man unit for months on end, so the process helps build lots of different key skills that are required in the army, and not just physical ones.

“One guy last season hadn’t ever eaten soup before, let alone cooked it; but by the end of the season he was cooking really nutritious food, his driving skills had improved massively because he had so much practice driving at night and in snow and ice, and his confidence developed hugely,” explains Diprose.

“For me personally, Army skiing keeps me in the army and has shaped me tremendously. I started as a Private and have worked my way up through every rank to Captain. Skiing has given me so many opportunities to be successful and I absolutely love it.”

Of course, it helps that Capt. Diprose is so good at it too.  For the last fifteen years his Corps has won the Princess Marina Cup (the oldest Alpine and Nordic Skiing competition and one of the hardest fought trophies in the Army, awarded to the Overall Champion Unit in the Army for the Nordic/Alpine Combined Unit.

This epic competition combines Alpine (Giant Slalom, Slalom, Super G, Downhill) and Nordic skiing (15 km Cross Country, 10 km Biathlon, 4 x 7.5 km Biathlon, and the 30km Military Patrol Race which  is the deciding race in the event of a tie.) He is quick to point out that his corps have won more times than any other corps and he is particularly proud that in 2017, 2019 and 2020 the 6 Regt were the winners. 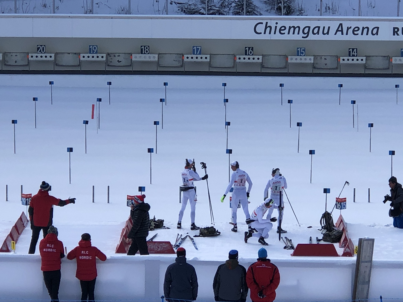 This year however, due to Covid19 restrictions, it will be the first year that the Army teams are unable to travel abroad for training.

“As a regiment we were stood down in April and lots of soldiers sent home, so it’s been hard. Social distancing doesn’t come naturally to a unit that’s by its very nature is built on solidarity, but we are adapting. I know my team is gutted that the season has been cancelled as they have such a driving desire to win for their corps and their regiment.”

Normally the team would be off to Norway soon for a training camp but Covid has stopped this so Capt. Diprose is busy trying to find ways to keep troops motivated and interested. “We’re organising a five-day race camp in Castleford and a roller skiing competition. In April we will deploy to Cyprus for six months so hopefully after a short break on our return we’ll finally be able to get back on the mountain.”

This, after all is where this team feels it belongs – as Diprose explains: for the Royal Logistic Corps Winter Sports Association: “Skiing is not a matter of life and death, it is much bigger than that.”